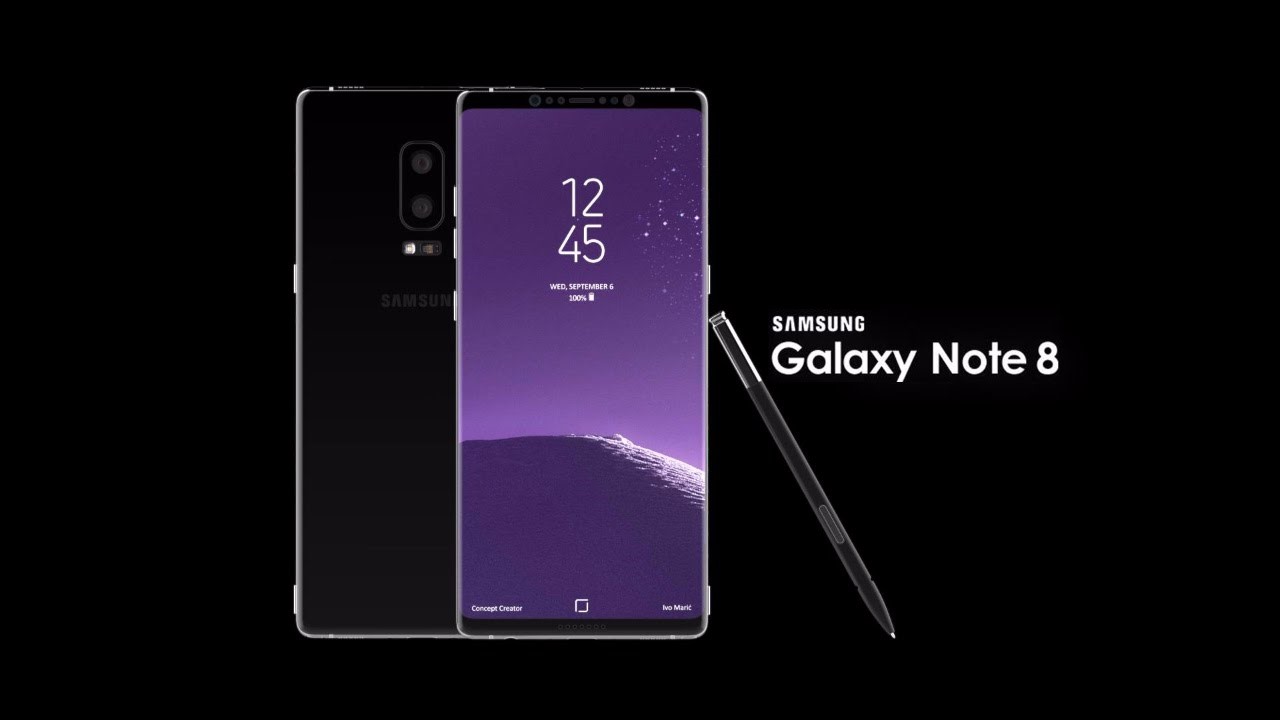 After the glorious rise and then, an explosive fall of the Galaxy Note 7, Samsung must bounce back in order to earn customer trust back. While most people thought that Samsung has had enough of the Note series after the explosive reputation of the Note 7 which caused it to become the first ever phone in the history cell phones to get disallowed on a flight! But apparently, Samsung has decided to give another shot at it with the Note 8.

The initial announcement of the Note 8 came after the company presented an upgrade scheme in South Korea after the misfortune of the Note 7. This scheme allowed Note 7 winners to get the Samsung Galaxy S7 or S7 edge for half the price and will eventually be upgraded to the Galaxy S8 which is now available, or the Note 8 when it is released.

Although the phone is a long way from release, we did gather from some reliable sources that it’s going to be an expensive one with the entry level 64GB Galaxy Note 8 expected to start from as high as $1,100 which is much higher than the 64GB S8 Plus and the 256GB iPhone 7 Plus.

The design is not expected to be very different from what the Note 7 has already delivered; but, it is expected to come with minor changes such as with reduced bezels like the Galaxy S8 and S8+. The S8s, as you should already know, features an almost edge to edge display with the fingerprint senor positioned at the rear. The Note 8, therefore is expected to something similar and it’s also expected to stick to a curved display like the S8 phones. 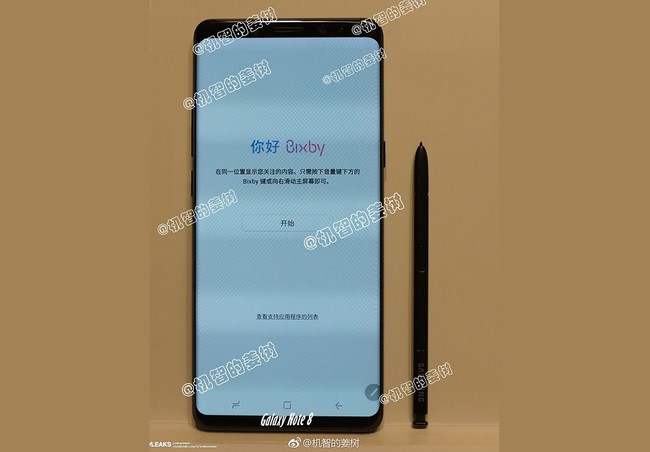 The website Slashleaks has recently released a picture of a phone that it claims to be the Galaxy Note 8 which looks very similar to the S8 and the S8 Plus which is expected, but it does seem to look wider which makes sense if you keep in mind that the S Pen has to be slotted somewhere. In the original picture, the Note 8 Is shown with the S Pen placed next to it. However, it’s still a bit too early to decipher where the fingerprint scanner is going to be placed since there’s still some talk in the market that Samsung may place their fingerprint scanner on the home screen.

A few shots from @Onleaks show that the back of the phone will have a raised panel consisting of dual lens camera, heart rate monitor, LED flash and a fingerprint sensor. 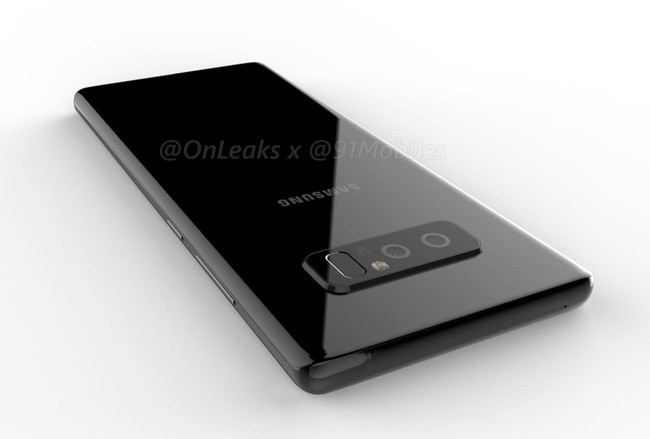 Moving away from the design of the phone, let’s talk about the display for a while. The Note series has stuck with the same 5.7-inch screen ever since the Note 3 and it’s time to break free from the tradition. It’s been claimed that the Note 8 will arrive on the market with a 6.3-inch screen while maintaining the same aspect ratio of 18.5:9 of the S8 and S8+, this has been confirmed after talking to reliable sources from the Galaxy Club. This idea is corroborated by the front panel leak found from Slashleaks mentioned above. The Note 8 is also rumored to have an infinity display which is what Samsung calls its near Bezel-free display featured on the S8. One can also safely assume that the displays are going to be armed with Super AMOLED technology as well as Mobile HDR. In the era of VR and spotless clear resolutions, the Note 8 is also expected to come with 4K technology, unlike its predecessor. 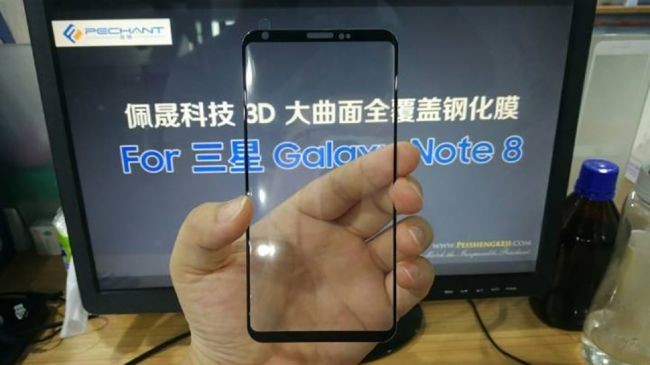 4K displays, in the cell phone market, are still a rare phenomenon as the only devices that offer them are the Xperia Z5 premium and the XZ Premium- while 4K displays rarely make any difference in your everyday lives, these are highly functional when it comes with a VR headset in front of it. 4K displays; however, consume more energy and after the disaster of Note 7 batteries, we are not sure how Samsung plans to handle the extra energy consumption.

When it comes to smartphone cameras, Apple and Samsung have long competed with each other and have proven to come out on top of each other countless times. Samsung’s latest releases, the S8 and the S8 Plus have incredible snapping capabilities and the Note 8 is expected to not only continue this long line of rivalry, but it is also expected to come up with a ground breaking camera. While we don’t have a whiff about the megapixels that the cameras might offer, we are sure that it’s going to be a dual rear-camera since that’s the trend in the market now and that’s the common outcome from all the leaks that have been found till date. While most are sure that the rear cameras are going to be dual, there’s still some speculation about whether it will be vertically aligned or horizontally. Regardless, expect the same functionality as the cameras in S8 and S8 Plus, only, since this is the Note 8, expect better.

As known from its predecessors, the Samsung Galaxy Note 8 will only come with top-of-the-line hardware under its hoods. The chipset will either be the latest and the best Exynos or Qualcomm. For RAM, we may get 6GB if we are lucky but there’s also a 4GB possibility like the S8 and the S8 Plus. For internal storage, it’s safe to expect at least 32GB- expandable with Micro SD cards. Rumors state that there will be options for 64GB and 128GB internal memory.

When it comes to the battery, hopefully, this year’s Note eight won’t have explosive reviews about itself! Jokes apart, the batteries of the Note 7 offered a good 3500mAh, which was also consistent with the S8 Plus, anything near that or exceeding that is more than enough.

The speakers of the Note 8 are thought to have been developed by AKG, as evidenced by the leaked renders from Poyoco Tech. Also, given that the S8 and S8 Plus were released with AKG headphones and the fact that Samsung owns the parent company of AKG, it would be safe to assume that the speakers and overall music system of the phone have been developed by the same company.

One thing that we are certain about is the software that’s going to be operating the Galaxy Note 8 which will arrive with the Android Nougat assisted by Samsung’s inhouse software, the TouchWiz. You can also expect a hoard of new technology and new Samsung apps to support the S Pen features. Rumor has it that the stylus of the Note 8 will be more advanced compared to anything in the market currently and that it will have much improved features compared to the Note 7 along with Bixby voice assistance.

For those of you who can’t wait to get your hands on the Note 8, you will be happy to know that Samsung has already announced that the Note 8 will be released this year. Sadly, we don’t know exactly when it’s going to be released but Autumn this year, may be a safe time to assume the release of this phone. In fact, the month of October is something you can aim for since it puts this phone’s release exactly six months after the release of the S8, just perfect! Later release for the Note 8 can be a good thing for many, cause the later the release, the more time you will get to save up to buy it. The price, as mentioned before, may as well go into four-figures, or at the very least, stay in triple figures but be very close to a four figure number.